It comes to something when a continental weekend away is planned around a parkrun. Not that we’re addicted to parkrun or anything, but if that city has one, then it would be rude not to show our running shoes and chat over coffee and croissants afterwards.

In Paris, we had a choice, there are two parkruns, a little out of the city, so we chose a hotel at Puteaux, that was nearby, relatively. We had a 5km brisk walk to get to the Bois du Bologne, the longest warm-up I’ve ever done, but I was ready to join the hoards of local parkrunners and pick up a few new words of vernacular French for my running vocabulary.

We trotted up to the start, after marvelling at the Bois de Boulogne, which is like a very large version of Calverley Woods, I even did a spot of le plogging en route, though there wasn’t much too litter around and we’d spotted poo-bag dispensers, bravo! We’d passed many runners in the park, expecting to meet them at the start line, but no. parkrun in France is nowhere near as popular as it is in the UK, and there were just over 30 of us there to hear the Run Director explain the course first in French, to the two locals who probably already knew, then in English for the rest of us. Looks like I wasn’t going to pick up any French vernacular that day!

What a wonderful run in a beautiful place with delightful people. The Run Director, a Brit who lives and works in France was very interested to hear we were RDs in Leeds and I think, given half a chance, would have let us help him with the results as he’d only just taken over.  He confessed it had been Tuesday the previous week before the results were out, but hey, who’s in a hurry?

The post-parkrun coffee was en plein air, in warm sunshine, with the usual interesting tales from a group of people brought together by their love of parkrun. I was chatting with one of the French parkrunners and asked why it didn’t seem to have taken off with the French, even though the French clearly loved running. He just smiled and shrugged in that wonderful Gallic way that always says, ‘I don’t know, I really don’t know’. ‘Mais moi-même, parkrun, je l’adore,’ he added.

Personally I’m looking forward to many more French parkruns, not just for the running,  the coffee, croissants, and good company, but because I’ll always be near the top of the results rather than leading from the back. In France, results are presented in alphabetical order by first name and this week, I was second to Alison. Maika was some way behind, and ahead of Noel. I definitely like parkrun France, in fact, parkrun, je t’adore! 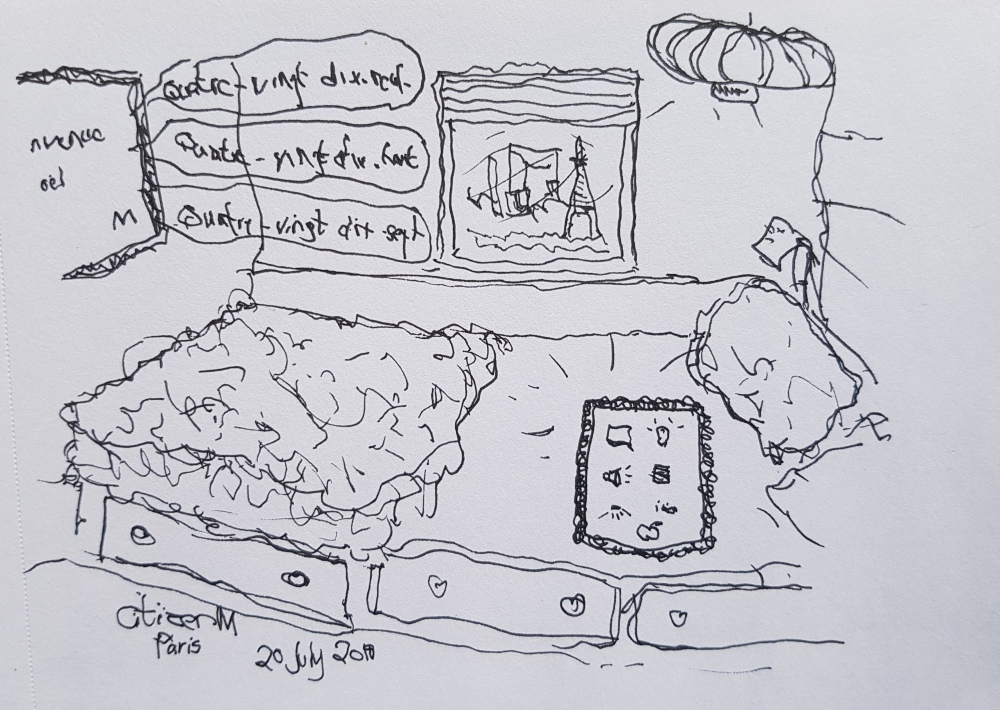 What happened to the light switches? And the TV controller? And how about closing the blinds. Come to mention it, where’s the proper alarm clock that goes tick tock and scares you to death with a loud clang in the morning?

Granted, the stylish bijou room at Citizen M near the Gare de Lyon in Paris was smooth and spotless, no hard edges in sight and almost clinical in its whitetty whiteness. I thought I’d stepped through a wormhole and ended up in quarters on the starship Enterprise.  The bed filled the entire wall under the window and the giant screen pulsed with the message ‘Bienvenue, Noel…’. We had no idea how to turn it off.

To one side of the room was a floor-to-ceiling pod in opaque glass, not the transporter, but the shower and toilet. There were no switches in the pod. Even the litter bin was beautifully curved so it fitted neatly into the allotted slot. But where was the light switch? And the bloody TV remote? The welcome message was getting on our nerves.

Siting prissily on the curvy shelf was an iPad, with the same welcome message, only smaller. This was the TV remote. It was also in charge of the aircon, blinds and scarily our mood, we suspected it might have something to do with the lights.

Noel, being the designated techie, pressed, swiped and pinched the little screen and managed to sort out the lights, there were a lot of lights. But then he found the mood setting and asked which I’d like, listing the options. ‘Business’, I said, more out of curiosity than anything else. The lights came on, brighter than bright, stirring music , the kind to do deals to, spluttered from the speakers. Maybe not, then.

‘How about party?’ he asked, hoping I’d say no. I said yes. The lights turned red, blue, green, yellow, a weird shade of orange. The shower pod lit up like a Dr Who prop, the screen jumped to life with what looked like hallucinogenic images,  spinning smileys, the music throbbed and thrummed, I could feel a migraine coming on.

‘Agh no….let’s go for relaxing!’ One prod of the iPad and the lights dimmed, the screen became rolling countryside, birds sang, water flowed and splashed, which necessitated a trip to the pod. But it was good, we relaxed enough to want to sleep, if only we could find the light switch.

Noel thought he had the answer, a ‘go to sleep’ icon. I braced myself, fully expecting a Monty Python foot to come down from the ceiling. We were plunged into darkness as the blinds clanked shut.  I wanted to read. I couldn’t.

Noel had managed to set a wake-up alarm with the magic iPad, we had no idea what to expect. We certainly didn’t expect, at 7am, a female voice to break the rhythm of Noel’s snores (definitely him snoring). ‘Quatre-vingt dix-neuf, quatre-vingt dix-huit, quatre-vingt…..’ Oh my goodness, the room was counting down, we really were on the Enterprise. I wasn’t going to wait until she got to ‘un’ and grabbed the iPad, swiping and prodding like a woman possessed. The counting stopped, the blinds lifted and the shower turned itself on at exactly the right temperature, actually I made that up, but I’ll bet there’s an app for that.

One day, all hotels will be like this, intelligent, responsive, hip, with efficient self check-in and a key card you can keep as a luggage tag. I’ll go back to Citizen M, if they’ll have me, but in the meantime, can we please have a bloody light switch?!

The most striking thing about the whole scene wasn’t the flowers, the photographs of those who will never grow old,  the poems, the heartbreaking personal items or even the pictures drawn by children. It was the smell,  the sweet scent of hundreds of candles lit in memory of stolen lives.
We’d already booked our short break in our favourite city. We go back to Paris again and again,  it’s full of culture,  art and attitude. Even though we speak the language,  we can be snubbed by haughty waiters like the rest of the tourists.
When the news broke that bombers and shooters had robbed 130 people of their lives we hesitated, but only for a moment. They were people like us,  enjoying Paris,  people who would be here today except for the madness of a few. We felt that if we didn’t go,  the terrorists were somehow winning,  and we couldn’t allow that to happen.
Our hotel was just behind the Bataclan where gunmen had killed 87 innocents enjoying a gig. Barriers were still scattered around, supporting flowers and memorials. Candle wax was spilled on the road like a Jackson Pollock painting.
A steady stream  of people filed past,  stopping to read, pray,  weep. A lady who looked about my age arrived and unrolled a small poster with a photo and poem which she lodged in the railings. She then took out a candle,  which she lit. I could have taken a photo,  but I didn’t. It was a private moment in a very public place.
I’m glad we went to Paris,  behaving as normal,  though we couldn’t miss the massive police and army presence, nor the bag searches everywhere from the Musee D’Orsay to Gallerie La Fayette.  But at least we were free to do this. Unlike those living under the black flag of Islamic State.

Who would have thought it? All day long the feet of thousands of tourists had tramped over the Pont de Solferino and the first person to spot the shiny gold ring was a dear old granny.

We were faffing with something or other, I’d probably lost my sunglasses. Again. Then found them on my head. Again. The old dear explained she was a humble soul and that the solid gold men’s wedding ring meant nothing to her, but to us it was surely the luck we deserved. She must have thought we were down on our luck. Well she had witnessed the faffing.

She explained, in French, that she was an evangeliste and this was a sign for us. Yes, we thought in English, a sign that she was a scammer. Off she went, presumably on the way to Heaven, the Heaven where money and deceit are gods, leaving us with the ring. We had a lot more faffing to do  so we carried on doing just that, then, quelle surprise, granny reappeared. Would we like to give her some money for a drink? No not really, we said, but we could give her a very valuable gold ring which she could sell. Funnily enough she didn’t seem to want those earthly riches. But we gave her it anyway, though she didn’t seem very thankful.

The faffing continued, Noel sat down as I took arty farty photos. In that short while, no less than three gold rings were found, we really are lucky. As we left, an American couple were looking wide eyed at another ring. We marvelled at our shared good fortune, then hypothesised that it may indeed have been a scam.

As we finally crossed the bridge the dear old lady was no longer smiling. She gesticulated and said in broken English ‘Fook you, keese my assss.’ Well that’s like no evangelistic language I’ve ever heard before!

The photo is of graffiti that appeared outside the hotel overnight. Ooo Paris is such an arty place! 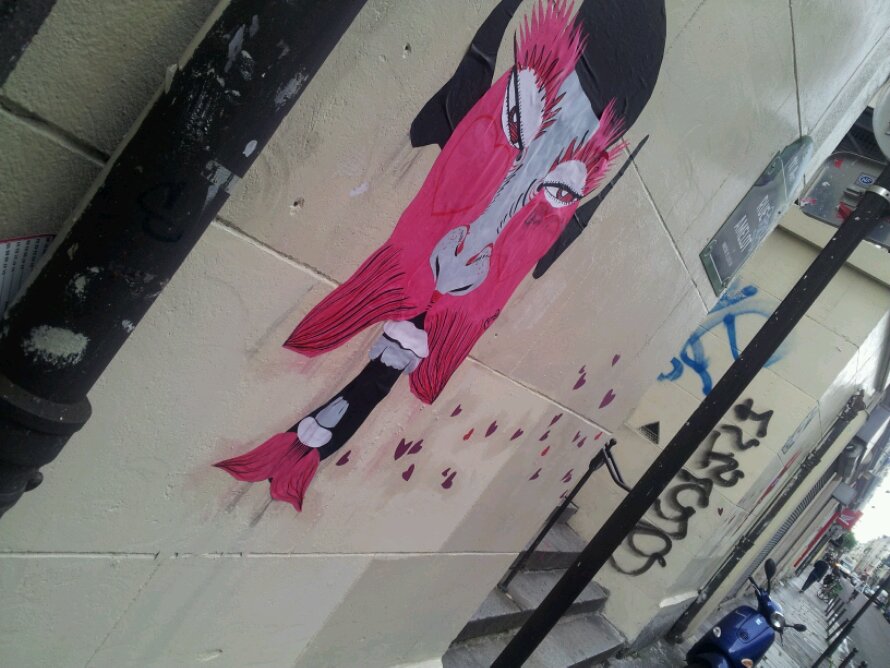 It wasn’t so much the one hour queue for the tickets, nor the further hour queuing in another line to get in, nor even the half hour wait  for the toilets (five seconds if you are a man – isn’t it always the case?). It was the  way we were herded through the stately rooms once occupied by the Sun King himself which I worked out cost us one Euro a minute that made me rant in my best French ranting voice only usually heard after a couple of glasses of  kir. And they had the cheek to put up a sign warning about pickpockets. Our pockets had been well and truly picked!

If we’d just spent all our time in the fabulous gardens at Versailles, I would have been happy. The miles and miles of manicured lawns and fabulous fountains inspired by the Greek gods were splendid and gave me inspiration for our own humble patch of Yorkshire greenery. Though there was a lack of places to sit as anyone who went anywhere near the grass were warned off with the shrill shriek of a whistle. I love the French, but they do do officious.

But it was a wonderful way to spend our 12th wedding anniversary. I did manage to break my glasses though, kneeling on them as I took a photo. Good excuse to buy a fancy pair of designer specs while I’m out here.