Safe and glad to see Dave Woodhead. Thanks for the photo, Dave!

I was doing the usual working my way to the back of the pack as we climbed on to the featureless, soggy, sticky, slippery Haworth moorland. I do love fell running, but I’m not fast, so am always very careful to check out the route beforehand, to avoid any navigational hitches or embarrassing calls to the rescue services.

Noel and my friend Maika has disappeared into the distance, I didn’t expect to see either of them until I hobbled up the cobbles of Haworth main street to the finish line. As it turned out, I was wrong.

As well as being featureless, the moors can be hostile, cold and bleak, no wonder the Brontes weren’t Misses Chuckletrousers with such a draught blowing around the houses. But I was confident, the Bronte Way was point-to-point, the bus had dropped us at the start and all we had to do was find our way back, eight and a bit miles, or 12ish kilometres in new money.

I was finding it tough going, the ground was spitting smelly mud at me and the rocks were conspiring to bang me on the ankle. I was having a bit of a pity party to be honest, I didn’t seem to be making progress and it took ages to do less than a parkrun. As I struggled up a steep hill, fighting the heather and bracken, my phone rang. That was all I needed, it must be a PPI call in the middle of the moors, who else could it be? And on a Sunday too, I wasn’t going to answer it, I mean, shouldn’t they be bothering someone else? Anyway, I didn’t have the strength to get the damned thing out of my pack, the message pinged and decided to check at the top of the hill, just in case it wasn’t PPI.

Then I heard my name, carried on the wind…’Anne, Anne…’. OK, I was definitely hallucinating, it was the fumes from the bogs. ‘Anne, ANNNNE!!!!’ wow, they were some fumes. But as I glanced down, I saw Maika emerging from the heather at the bottom of the slope. At first I thought she’d been trying out a high-speed roly-poly down the hill  to add to her fell-running adventure, she’s Japanese and always up for a challenge. Then I was worried she’d taken a tumble.  Either way, she was way off course, but uninjured and obviously very pleased to see me.

As she made her way up the steep slope, almost crying with relief, she told how she’d taken a wrong turn. On the plus side, she’d taken some amazing photos that no-one else on the run had seen. On the minus side, she was well and truly lost, not helped by asking directions from a brusque Yorkshire farmer who had told her ‘Get thissen up t’fell sithee yonder, tha knows’. Despite extensive tuition in advanced Yorkshireness, she had no idea what he meant, but his upward-pointing finger sent her towards the sky. Fortunately, I happened to be passing.

It was Maika who had phoned me, she had panicked when she got lost. I assured her we had no coyotes, wolves or bears on the Yorkshire Moors, though the grouse could get a bit grumpy. Her loss, or getting lost, was definitely my gain, I had company and soon discovered that my slower-than-usual progress wasn’t as bad as I thought as my watch had suddenly started counting in miles, there wasn’t far to go. We chatted as we ran, taking photos and enjoying ourselves, that’s what running’s all about really.

The wonderful Dave Woodhead who, along with his wife Eileen organises and photographs Woodentops fell races, was waiting for us and heard our tale of woe. He thought it was hilarious, well, he would, wouldn’t he? As usual, his photos made us look rather cool. Gotta love that guy!

As we ran up those cobbles,  crossing the finish line joint last, we laughed, but not caring one jot. We’d had an adventure, and Maika had another Yorkshire story to tell. 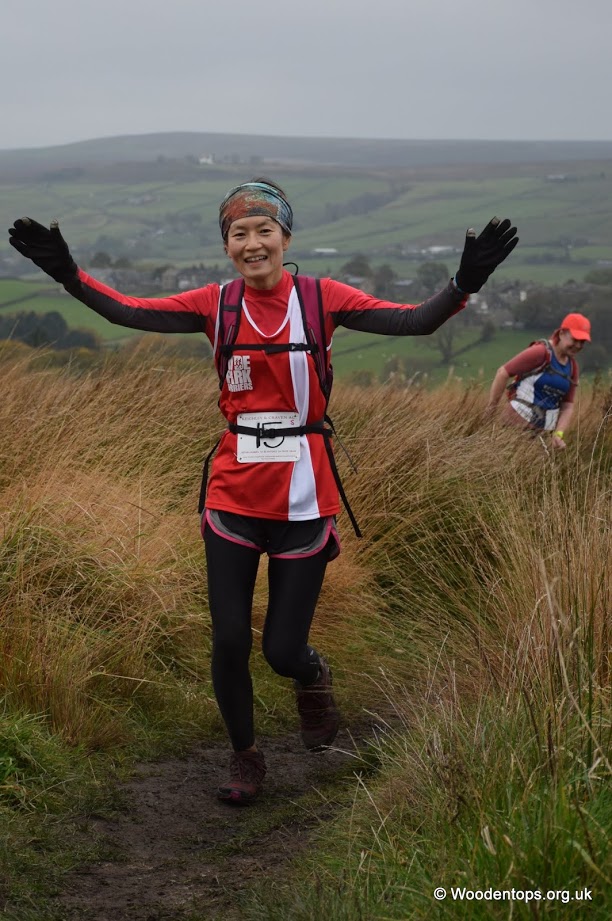 Nearly there! Thanks to Dave Woodhead for the photo!

What would Mo do?

Here in the country that beat the mighty China to second place in the Olympic medal table, we’re all feeling pretty chuffed. Our girls, boys and horses did us proud, and of course they did themselves proud in Rio.

The magnificent Mo Farah took a tumble in the 10000m, but got up and went on to win, and then he took gold in the 5000m. Watching him is a real education in winning. He starts at the back, he makes his move, then regulates his pace. And as the bell for the final lap goes, so does he, his opponents don’t see him for dust. That kick, that stride, that speed, on my goodness, he’s an inspiration.

Come September 11, I’ll be lining up with 200 others at the start line, ready to run the tough and over-long half marathon that is the Yorkshireman. I won’t be owning the start line, or believing I can run it any faster than anyone else, and I’m certainly not planning on sprinting to the finish, dammit, it’s uphill! As usual, I’ll be aiming not to be last, but by gum, I’ll have such a spring in my stride as I relive those magical Mo moments in my head. 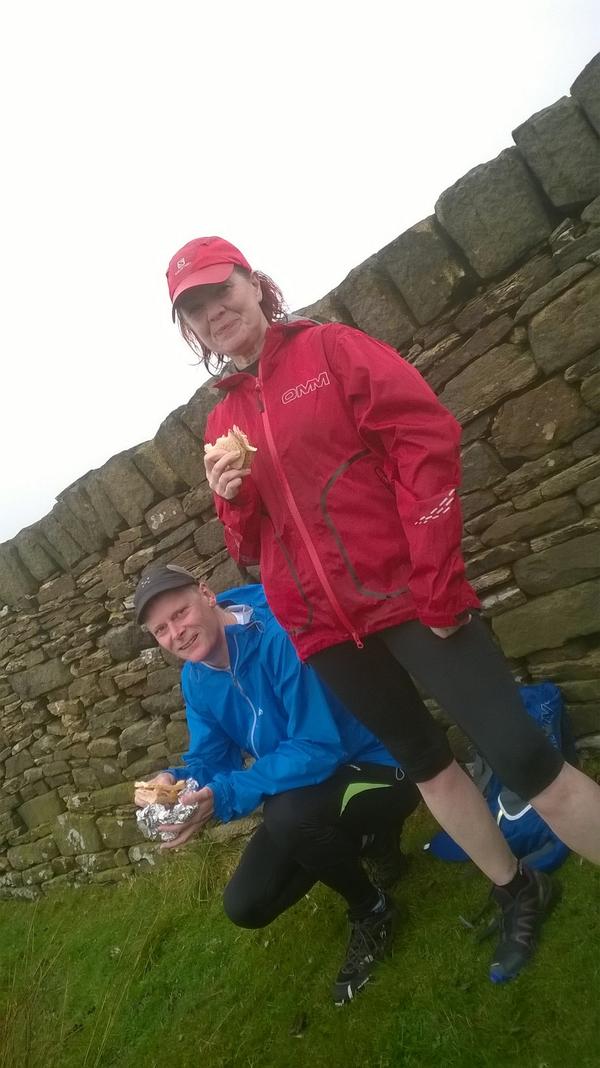 Turned out nice again. Thanks to Neil for the photo.

Noel, our friend Neil and I were reccing the Yorkshireman Half, a half-marathon-and–bit which I did last year in warm, dry, sunny conditions. Somehow the moors above Howarth which inspired the Brontes’ rather bleak novels looked very different in the mizzle of Bank Holiday Monday. I’m not saying we got lost, just that my memory played tricks and I did the usual thing of speaking with such authority that contrary to all logic, the guys headed off in the wrong direction. Still, it gave me chance to catch up and get my breath back as they are both a bit nippy.

We weren’t exactly wet, but we weren’t dry either. It was that happy combination of warm, comfy technical clothing that keeps the wet out but despite what it says on the label, can’t stop the condensation. It was certainly a million times better than the old cagoules with thick plastic coating that cracked after an hour’s exposure to sunlight and we agreed that there was no such thing as the wrong weather, just the wrong clothing.

The rain came down and we still had half our run to do, with promises of plop, plop, plop through the swollen streams and skid skid skid over the slimy gritstone. But as we surveyed what we could see of the moors through the low cloud, we agreed there was no finer place to be.

There comes a point in a race, usually half an hour after it’s finished, when I’m overwhelmed by a wave of contentment and satisfaction and just want to go out and give the world a great big hug.

Yesterday, despite steep hills, random scattered boulders, slippery peat and a finish up the cobbled streets of Haworth, past bewildered tourists eating Mr Whippy 99s with sprinkles, that wave of wellbeing hit me almost from the start. I say almost, for to be honest (and this is a technical term) I was parping myself at the prospect of setting off on the Half Yorkshireman. This race is just short of 15 miles, so where the ‘half’ comes in, I have no idea, maybe it’s something to do with losing half your bodyweight on the way round. Technically speaking, and I’m all for technical, it’s harder than the full marathon held at the same time, as all the hills are at the start, it’s just shorter. I think the marathoneers would say the jury’s definitely out on that.

But as soon as we were off and up the first of many hills, emerging into the open moorland, I felt incredibly happy. The fine weather helped, but it was more to do with the camaraderie of off-road runners. I exchanged pleasantries, stories and even debated the social policy underpinning health and social care reforms with fellow runners as we progressed upwards and onwards.

Running on the moors. What’s not to like, eh?

Of course it was hard and of course I was far from speedy, but with such fabulous surroundings, why hurry? It will be winter soon enough. Noel had been injured and hadn’t been able to put in the miles, so opted to be photographer for the day, popping up at various points on the route to snap anyone who passed, another reason to be cheerful. He commented that everyone looked as though they were enjoying themselves.

But the biggest boost of all was just near the end. The Half Yorkshireman has a sting in the tail and there’s a steep ascent up a cobbled road to the finish, which is not what you want on wobbly legs and insides that feel like they’re making their way outside. As soon as I rounded the corner I could hear my name being called and loud cheers, it was my lovely buddies from Eccleshill Road Runners, Julie and Martin Steele. Immediately, my head went up, my tired legs lifted and I was off, followed by the Steeles who saw me into the finish.

There was some suggestion that I might try the full marathon next year. Now that’s just plain daft.  Though if it’s easier……maybe……..Naw…….! 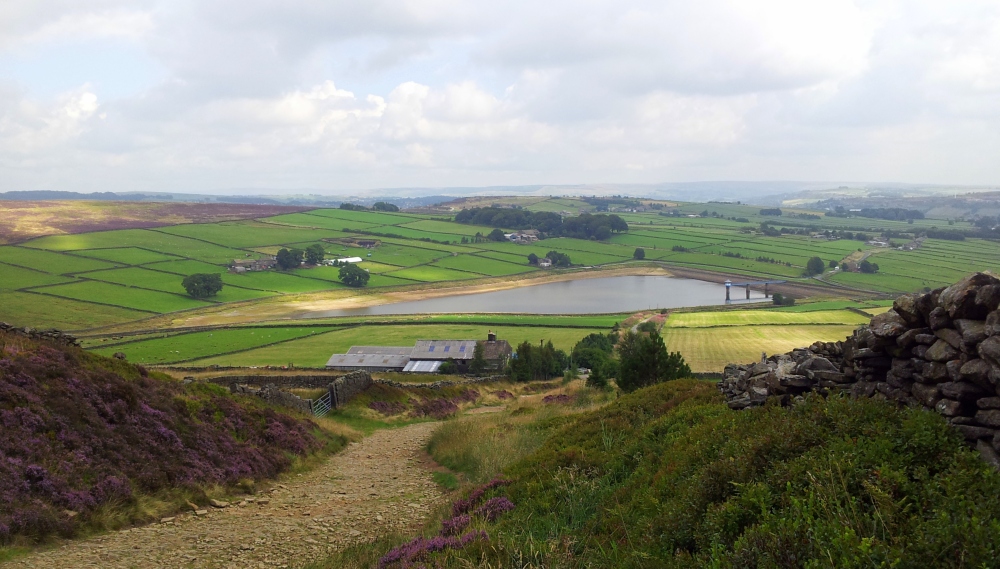 We ran up that. Eee it was steep!

Just think, five years ago the furthest I had ever run was about 100 metres, and even that was a challenge. I’d never tried it, didn’t believe I could do it and thought I was just too old to take up this sort of thing when I should be taking it easy and ordering my Shackleton’s high seat chair.

Today I put on my trail shoes, as opposed to my road running shoes, runners need different shoes for different terrains, you know, jammed my running pack with liquid, jelly babies and waterproof, picked up the map and set off to recce the Half Yorkshireman. This half marathon so rugged, so gnarly, it’s nearly two miles longer that an ordinary wussy southern or Lancashire half marathon.

It’s long, it’s hilly and it’s tough, so what the HELL was I thinking of when I entered it? I could have stuck with shorter, flat runs, not that there are many of those in our part of the world. But no, once I got going with this running lark, I realised that while I’d never be hot on the heels of Mo Farrah, I rather liked taking part in races, the more difficult the better. And mud, I liked that too, though there’s been a disappointing lack of it during our long, hot summer. So when a friend said he’d like to take part in this little jaunt around Bronte country, I did my usual and said I’d do it before actually thinking about what it meant. Same old same old, eh?

Being Yorkshire, there’s none of this namby pamby signposting or cheering crowds lining the route. You’re expected to carry a map and compass and know how to use them, so a crash course on map reading was followed swiftly by Noel volunteering to do the navigation, as I wasn’t making any sense of all those squiggly lines.

With just two weeks to go, we’ve navigated most of the route now, thanks in equal parts to luck and good judgement, along with a helpful You Tube video, ah thank goodness for You Tube! It was a close call, though, when we realised we couldn’t find the starting point, but we’ll gloss over that, knowing we can just follow everyone else. Now all we need to do is make sure we can find our way to Haworth again.